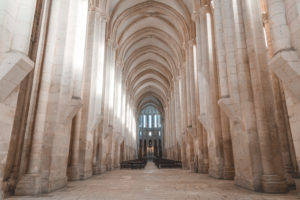 Transparency International Portugal (TI-PT) and the Directorate-General of Cultural Heritage (DGPC) present today, January 31st, at the Alcobaça Monastery, the Integrity Pact signed last December between the two organizations – a partnership which aims to guarantee the candour and integrity of public procurement processes related to two conservation and restoration works to be carried out in that Monastery.

The Integrity Pact is a civic monitoring tool created in the 1990s by Transparency International to promote transparency, integrity and accountability in public expenditure through the involvement of civil society organizations that act as monitors at all stages of the process: 1) Needs Assessment, 2) Choice and Preparation of the Procedure, 3) Award of Contract, 4) Execution of the Contract, and 5) Final Accounting, Payment and Sanctions.

This is the first Integrity Pact signed in Portugal

“This is the first time that a public body – in this case, the General Directorate of Cultural Heritage – is willing to share with civil society all the steps of a public procurement process, to be monitored from the beginning to the end. With this partnership we inaugurated a new dimension of transparency and civic participation in public investments in Portugal. The monitoring of civil society will allow citizens to be an integral part of the revitalization process of the Alcobaça Monastery“, says TI-PT’s President, João Paulo Batalha.

The DGPC, as contracting authority, has the technical support of TI-PT and its Committee of Experts, led by Professor Miguel Lucas Pires – of the University of Aveiro -, a specialist in Public Management and Public Procurement and Contracting for whom “the monitoring work will allow to identify potential abuses or bad spending of public money, avoiding damages to the State or phenomena of favor or lack of rigor. But more than that, it is a way of bringing citizens to the center of the public investment processes, ensuring that everyone’s resources are used in the best way to defend the interests of all.”

The works, which will progress later this year, include the conservation of façades and a total reorganization of the circuits of visit to the Monastery, including a new entrance and ticket office, new visiting spaces, and a new store.

In the words of Filipe Campos Silva, Deputy Director General of the DGPC, “the aim of the interventions is to give visitors a better context on this heritage of world importance, to encourage the enjoyment of the whole monument – not just the church, which is now the most visited area-, as well as a greater ticket control, which is crucial to more effectively managing the demand for visitors (individuals or groups) and ensuring strict sales of tickets, indispensable for the conservation of the Monastery.”

With areas of the structure dating back to the 12th century, the Alcobaça Monastery was one of the first monasteries of the Order of Cister (and the most important one) in Portugal, and is one of the best preserved Cistercian monuments in the world, retaining many of its medieval characteristics. As a result of its unique history, the monument was inscribed as a UNESCO World Heritage Site in 1989.

The event The Integrity Pact at the Alcobaça Monastery (see poster below) aims to disseminate both the conservation and restoration works that will take place in the Monastery, as well as the way the Integrity Pact works, and will include the participation of the Director of the Alcobaça Monastery, Ana Pagará, the President of Transparency International Portugal, João Paulo Batalha, the Deputy Director General of the DGPC, Filipe Campos Silva, and the representative of the Directorate General for Regional and Urban Policy of the European Commission, Inguna Kramina. 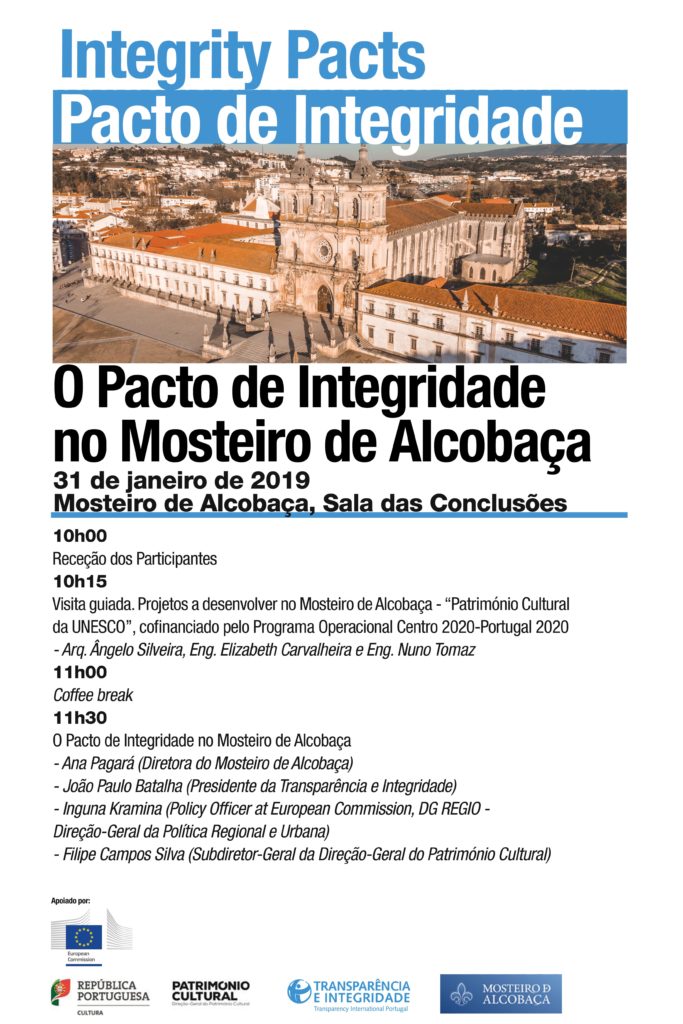